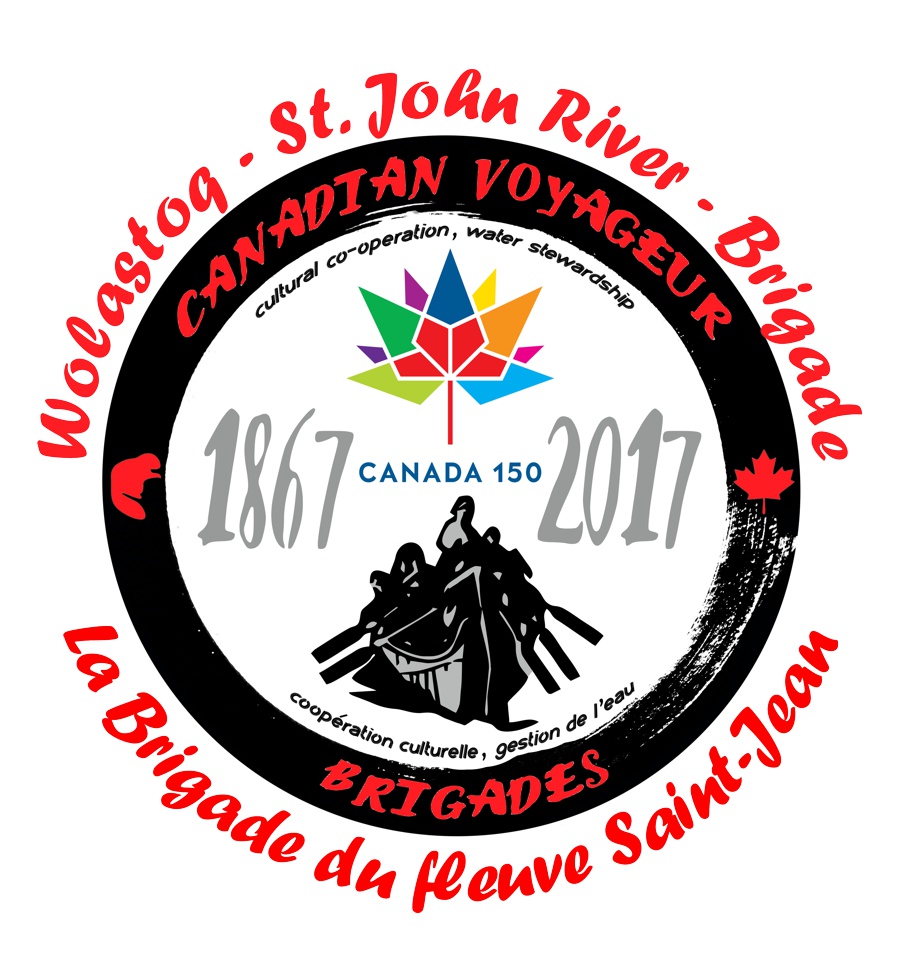 The Brigade will run from July 15 to July 22, 2017  and follow the St. John River, one of Canada’s Heritage Rivers, from its mid point in New Brunswick to the Bay of Fundy.  To quote the background documents for its CHR designation, “From beginning to end, the St. John River is rich in history. To the Wolastoqiyik, the original inhabitants of the St. John River region, the river was the ‘Wolastoq’, the good and bountiful river. The Wolastoqiyik kept pace with the changing economy brought by European colonization, war and industrialization. Today, they are a strong community that still identifies with their river. Many waterways in the St. John system have retained their aboriginal names, among them: Tobique, Meduxnekeag and Nashwaak. The St. John received its present name on June 24th, 1604, the feast day of St. John the Baptist, when the expedition of Sieur de Monts and Samuel de Champlain dropped anchor at the river’s mouth. Today’s residents of the St. John River descend from Wolastoqiyik (now Maliseet), Acadian colonists, Loyalist refugees from the American War of Independence and waves of immigration from Europe – particularly Great Britain and Denmark.”

The Brigade will start with an orientation day (registration and safety training) on July 15, 2017 at Florenceville, NB and finish the following Saturday, July 22 with a short paddle through the harbour in Saint John. Actual paddling will start on Sunday, July 16 and most days will see the brigade cover between 40 and 60 kilometers. We will be reviewing the route with local paddlers to ensure accessible landing spots and camping facilities are available, so there may be some changes.

Voyageur Brigades celebrate the heritage of the river and its communities.  We would like to thank our partners – McCain’s and the St. John River Society for helping to make this brigade a true Canada 150 celebration with community events along the route.  The St. John River, with its numerous communities along the river, is ideal for welcoming ceremonies at various stops and other forms of community participation. After leaving Florenceville, we anticipate stops in Woodstock, Nackawic, Fredericton, Gagetown, Oak Point, and a final stop in Saint John. See map here. Work continues with the various communities along the river and the St. John River Society to ensure that our Brigade is a part of their 2017 Canada 150 celebrations.

To date, the reception from communities has been great.  With the support of McCain’s and the town of Florenceville-Bristol, we will have a great opening kickoff event on the 15th.  The Town of Nackawic will host us on the 17th, again with music and events.  We will announce details of these and other memorable experiences including paddles under the longest covered bridge in the world, events in the capital city of Fredericton, and lots of Maritime hospitality along the route.  We are planning a great final day in Saint John with a closing banquet and a paddle through the Reversing Falls in Saint John (tides permitting).

Registration is now open.  We can only handle 12 crews as a maximum due to limited camping spaces at some of the overnight stops, so get your registration in early – first come, first served.  Crew fee is set at $2000, which will include all camping fees and events along the route, with crews responsible for additional food and entertainment expenses, as well as transport to and from the event.  Early registration requires a deposit of $500 (which will be credited against the total crew fee). Crews are responsible for supplying their own canoe and paddling equipment, including necessary safety gear. More details are contained in the general plan.   Further information about events and meals will be communicated as details are finalized.

There is also the possibility of some additional paddling in PEI, including a paddle across the Northumberland Strait, organized jointly by the Maritime Voyageur Brigade Society and the Hillsborough River Association.  Check out the new page outlining the Confederation Brigade!